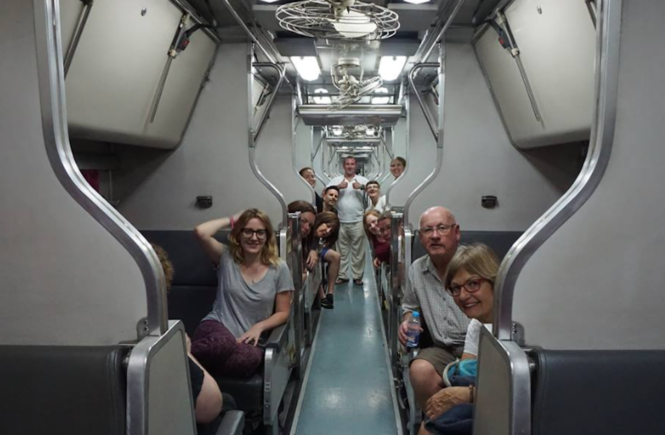 Hold onto your hats, fam, I’m writing a travel post! And about group travel, no less.

I know what you’re thinking – group travel is for people at either end of the life spectrum: drunk 18 year olds and over 80s. I get you, but hear me out. I’m not a people person. I don’t like people very easily, and having to make small talk with strangers is akin to Chinese water torture for me, yet I love group travel. Why? Well, I’m glad you asked.

I want to start by saying that I have travelled with 3 group companies, and all of them have been exceptional. If you want to check them out, have a look at their sites: G Adventures, Imaginative Traveller and ROW Adventures.

There is the obvious safety in numbers thing – especially for single women travelling on their own. But simple safety aside, there are more challenging scenarios to travelling that you may not have thought of. Ever tried to fight with a cab driver in Arabic? Explain that you have a severe peanut allergy in Thai? Or tell your mountain guide that you think you actually might die if you carry on climbing up the side of a volcano in Spanish? No? Would you want to have to? Nope, me either. That’s where your local guide will be invaluable. I’ve been in all of these situations, and would probably have died had I not had a good local chaperone. (A flair for the dramatic, me? Never.)

You may think that package tours are made to rip you off, but having access to local knowledge makes everything cheaper. I have travelled to so many countries where tourists are seen as a meal ticket. Had Tammy not told us that we shouldn’t pay more than 80 dirham for a particular trip, we would have paid the 400 the driver asked. If we had hired our own car to tackle the Pan-American highway instead of employing Ricardo, we probably would have (honestly) paid with our lives. (CY taxi drivers look like law-abiding citizens next to the Ecuadorians.)

Another thing to remember is that by travelling with a tour, you often get group discounts into heritage sites, for adventure trips and the like.

Basically, if you’re lazy or maybe just overwhelmed with the amount you’re trying to pack into your holiday, you really should just get people to do that for you. The tour companies want to you experience the best and most exciting parts of any country you visit – it’s in their best interests, too remember. If you loved a tour, you’ll recommend it to friends and family. We have inspired two couples to go to Morocco with Imaginative Traveller and another friend to do South East Asia with G Adventures in the last year alone.

And in my experience, they don’t want to just pack you into the most obvious tourist traps. We have seen more with tours (with the 3 companies mentioned above) than we ever would have if we were doing it on our own. You get to see places that the guide books overlook.

Best guide recommendation award goes to Dream and her insistence that we went to Pho 2000 in HCMC (Saigon). If I had seen it from the outside (and the inside for that matter), I would have NEVER eaten there, but we did, and now there are days when I crave their pho bo so much I consider selling a kidney to get back there.

There have been times when we wanted to stay in a place longer (hey, Laos), but the itinerary won’t allow it. Yes, it’s annoying, but how I see it, you will have great insider knowledge about that place, which will enable you to return and spend time doing everything you wanted to without having to first find your feet.

We’ve covered the fact that I’m not a people person, but on our last big trip, we were so lucky to travel through Thailand, Laos, Cambodia and Vietnam with the most incredible bunch of people. We are all still in touch and are very much involved in each other’s lives. Some of the first wishes on my wedding day and the day Jools was born came from those crazy cats. It also means that you’ll have a load of places to stay when you travel to their home countries. Paddling down the Yukon with the wonderful Maguires from Alberta is first on our bucket list, followed closely by drinking a cold beer with Wilson on her porch in Baltimore.

If you are toying with the idea of visiting a country you haven’t been to before, one where you don’t speak the language or are nervous of solo travel, do yourself a favour and look these guys up. You won’t be disappointed.